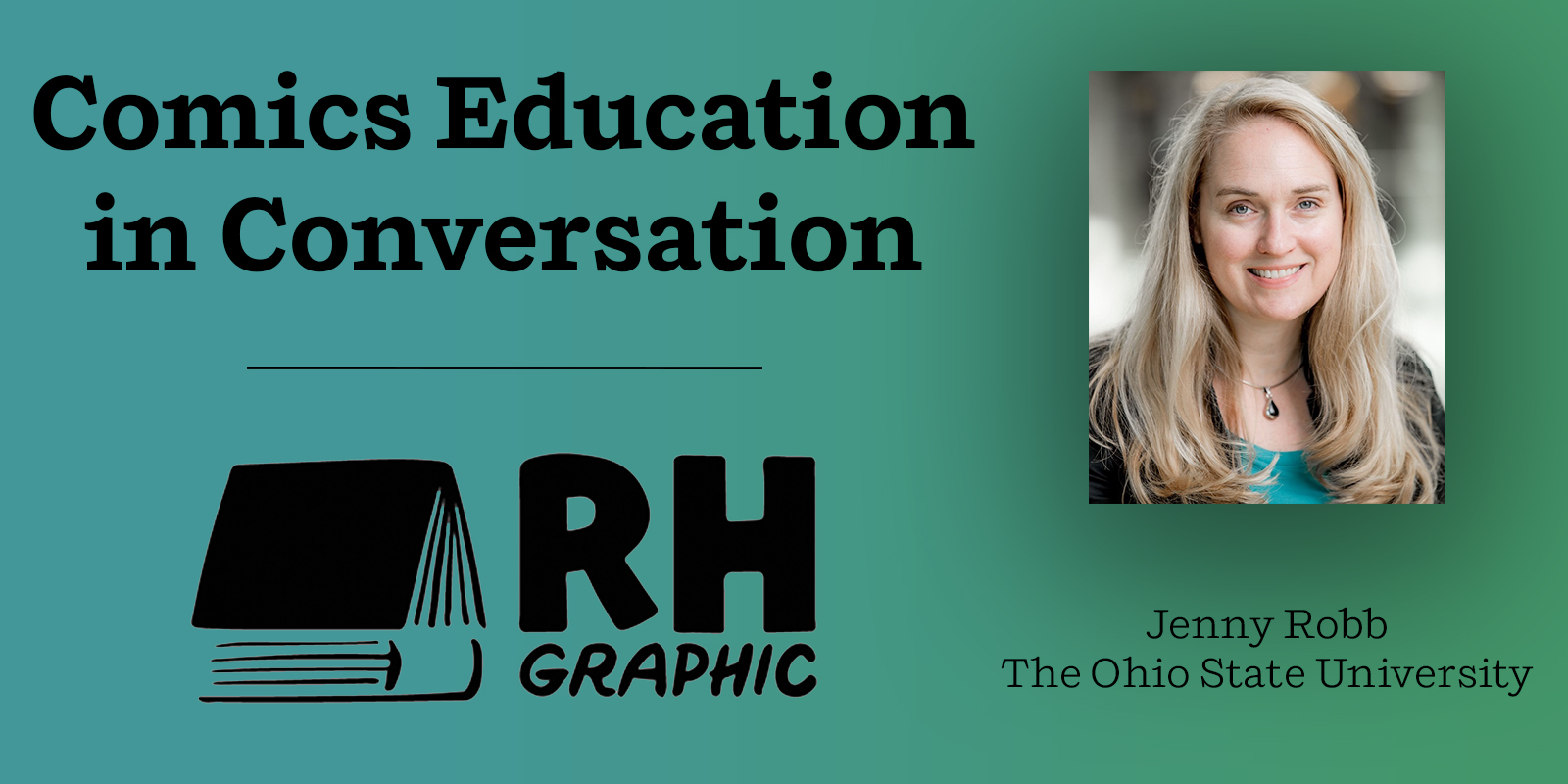 Jenny Robb (she/her) is Curator and Associate Professor at The Ohio State University’s Billy Ireland Cartoon Library & Museum.  She holds masters degrees in History and Museum Studies from Syracuse University.  Robb has curated many comics exhibitions, including Exploring Calvin and Hobbes; Looking Backward, Looking Forward: U.S. Immigration in Cartoons and Comics, and Into the Swamp: The Social and Political Satire of Walt Kelly’s Pogo.  She is also the author or co-author of numerous comics-related book chapters, articles and essays, including “Bill Blackbeard: the Collector Who Rescued the Comics” in the Journal of American Culture and “Finding Archives/Making Archives: Observations on Conducting Multicultural Comics Research” for the book Multicultural Comics: From Zap to Blue Beetle.

There weren’t many “graphic novels” for kids when I was growing up and I didn’t have much exposure to comic books, but I loved newspaper comic strips. My parents subscribed to the Cincinnati Enquirer and I read them daily. I also became a fan of editorial cartoons, especially the Enquirer’s cartoonist, Jim Borgman.

How did you get from your first comics-reading experience where you are today, working at the Billy Ireland Cartoon Library and Museum?

Who knew that “cartoon curator” was a viable career choice?  I certainly didn’t when I embarked on undergraduate studies at Wittenberg University in Springfield, OH. As a History major, I decided to write a paper exploring the ways Victorian working-class women were portrayed in images and how that reflected their status in society. I was originally thinking of photographs and illustrations, but my research led me to Ohio State University, where I found a full set of the British humor magazine Punch. The cartoons it contained were fascinating!  One cartoon in particular really struck me as revealing.  It featured a working-class woman looking directly at the reader with one black eye and the other eye hidden under at bandage. A woman in the background says: “What’s up wi’ Sal?” and her companion replies, “Ain’t yer heard?  She’s married agin.’”  The casual reference to domestic abuse as a punchline and as something that women of that class should expect from their husbands, rather than something to be remedied, tells us a lot about the challenges these women faced.  The project led me to explore other types of cartoons and comics and to recognize the importance of collecting, preserving and exhibiting this fascinating part of our cultural heritage. I realized that I could combine my love of cartoons and comics with my interests in history, collecting and museums.  I went on to complete Masters degrees in Museum Studies and History at Syracuse University. As part of my program of study, I interned at the Ohio State University Billy Ireland Cartoon Library & Museum (then called the Cartoon Research Library), which was a fantastic experience. My goal was to become a cartoon curator and I was fortunate to eventually achieve that goal.  After a brief stint at the wonderful Cartoon Art Museum in San Francisco in the early 2000’s, I started work at the BICLM in 2005.

I’ve seen a dramatic change for the better!  We have public librarians to thank for leading the way in accepting comics and graphic novels and promoting them to readers young and old.  In academia, there were pioneers like my predecessor Lucy Shelton Caswell and Randy Scott at Michigan State who started collecting comics in the 1970s. They recognized that scholars and students were becoming increasingly interested in studying this popular art form that is consumed by millions of readers. But it’s only in the 21st century that studying comics has really become a respectable academic endeavor. The reception has also improved in conjunction with an explosion of compelling comics stories being published and distributed.

Can you tell us a little about the Billy Ireland Cartoon Library & Museum, for people who haven’t heard of it before?

The Billy Ireland Cartoon Library & Museum houses the largest collection of cartoon and comics materials in the world!  It is part of The Ohio State University in Columbus, Ohio. We collect comic strips, comic books, editorial cartoons, gag cartoons (like New Yorker cartoons), graphic novels, even manga!  Our collection contains amazing treasures ranging from cartoons published in the 18th century to more recent favorites, such as original art from Calvin and Hobbes, Peanuts, and Bone.  Some recent donations include the original art for the graphic novel King by Ho Che Anderson and an original page from Fun Home by Alison Bechdel.  We also collect the papers and correspondence of cartoonists, so we have lots of interesting letters. Our largest collection is called the San Francisco Academy of Comic Art Collection and it contains millions of newspaper comic strip clippings and pages going back to the 1890s!

We’re a “special collection,” which means we have rare and unique materials that don’t circulate like regular library materials.  But anyone can see and read what’s in our collection by visiting our reading room, where our staff will bring the items out for our patrons to read and study. Also, in 2013 we opened a new facility that included a museum with three exhibition galleries dedicated to displaying cartoon and comics art.  The museum is free and open to the public. We currently have 3 exhibits on display: Billy Ireland Cartoon Library and Museum | (osu.edu).

You’re an associate professor – but also a curator – and also work at a library! How do those three things fit together?

My job is different every day!  As a museum curator, I create exhibitions of comics, I organize and participate in educational programming for the community, and I give tours of our exhibits. I also oversee our vast collection of cartoon and comics, which includes artwork, books and periodicals, and archives. And because I’m a professor, I teach university classes and conduct research.  But perhaps my favorite part of the job is meeting cartoonists and comics creators and helping to preserve their legacies.

How has the existence of the Billy Ireland affected OSU’s involvement in the comics space? Are professors and students engaging more with comics?

Yes, engagement with comics continues to grow.  It’s encouraging to see so many professors from so many different departments and disciplines incorporating graphic novels and comics into their classes.  We welcome lots of History, English and Art classes to our library to use our materials, which people might expect, but we’ve also recently worked with classes in Economics, Architecture, Sociology and Political Science, just to name a few!  The classes might study a particular topic, like immigration or civil rights, through the lens of comics or they might explore different aspects of the works in our collection, like narrative or drawing techniques.

The diversity of people now choosing to tell their stories through comics—and finding audiences for them– is exciting to see.  We’re focused on diversifying our collection by acquiring works from creators who are part of historically underrepresented or marginalized groups.  For example, one of our initiatives is to collect materials from Indigenous comics creators.  We’re constantly acquiring new work for our collection, but it’s hard to keep up with all the amazing work being published!

There are so many wonderful graphic novels being published!  Some more recent ones that I really enjoyed are Dragon Hoops by Gene Luen Yang, Human Body Theater by Maris Wicks, The Magic Fish by Trung Le Nguyen, and the “Nat” series by Maria Scrivan.  But really, the list could go on and on – there are graphic novels representing just about every genre and type of story.

Educating our students about climate change can literally change the future. According to a 2020 article in Proceedings of the National Academy of Sciences, educating young people about climate change could result in them making choices to decrease greenhouse gases, reduce pollution, and increase Green programs. While science class is a natural place to address 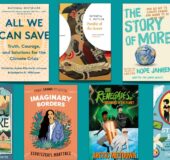 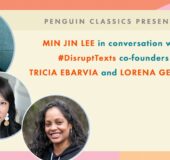