Colson Whitehead has won the Pulitzer Prize for his novel, The Nickel Boys. This is his second Pulitzer Prize (his novel The Underground Railroad won in 2017) and he is only the fourth writer—alongside Booth Tarkington, William Faulkner, and John Updike—to win two Pulitzer Prizes each in the Fiction category. Winner, ALA Alex Award In 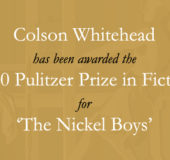